The Entrepreneurial Process is generally considered to be composed of four stages:

Much support and visibility is given to the latter three stages of this process, but there are not many initiatives aimed at supporting potential young entrepreneurs to take the embryo of an idea, and turn it into a solid business idea. Thus, the V2WORK Enterprising Ideas Competition (hereafter referred to as EIC) will focus on this first stage, while aiming to increase the confidence and creativity of the participants, inspiring them to think and act entrepreneurially. The competition is designed to build up the entrepreneurial skills of participants, providing them with real life experience in development and implementation of innovation concepts with limited resources and based on market viability.

For this first edition, the organising committee has selected the topic of “Green Enterprises” for the competition, thus the official name of the competition will be

Participants (individuals or teams) will apply with brief presentations of the business model for their ideas. The final stage of the competition will take place during the National Conference on Graduate Employment & Entrepreneurship to be held in Ho Chi Minh City on October 30 & 31, 2019, hosted by the University of Social Sciences and Humanities. The competition will be open for all winners of EICs previously organised within their institutions by the V2WORK partners, as well as the winners of similar competitions at other non-partner HEIs in Vietnam. A jury will select the winning idea based on their score, with a second place team receiving a “runner-up” certificate. A second prize will also be allotted based on the vote of the general public at the National Conference. These awards will be called “Grand Jury Award” and “People’s Choice Award” respectively.

Each team shall be represented in the final stage by one student, who must be a student enrolled at the time of the competition in the respective university.  This student will present an elevator pitch of the team's green enterprising idea during the National Conference, as well as represent the team during a special networking session in the conference during which conference participants will be able to meet the competitors and ask questions about the projects with the support of a poster specially prepared for this event. The elevator pitch will be delivered in Vietnamese, the poster must be prepared in both Vietnamese and English.

The application package must include the duly completed application form (available to download below), in both Vietnamese and English. Also available to download below are the Guidelines for the V2WORK Enterprising Ideas Competition, the poster model in pdf (please request the ppt template from Dr Dinh Van Hai when sending in your application) and the Jury package (so competitors will have a better idea on how they will be evaluated).

The three best projects (Grand Jury Award, Grand Jury runner-up and People’s Choice Award), will receive as a prize the opportunity to be mentored by business experts from the company Vinacacao, in order to further develop their products or services so they can make it to market. During this mentoring phase, the sponsor Vinacacao will evaluate the three teams and their efforts to market their products/services, and will sponsor the best team to spend a week at the University of Alicante in Spain. 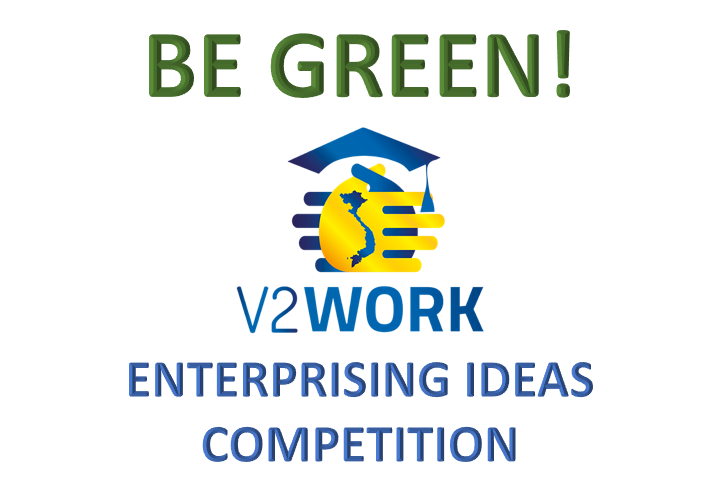